I put the “Deathly Hallows” pendant as a gift with this splendid suncatcher. 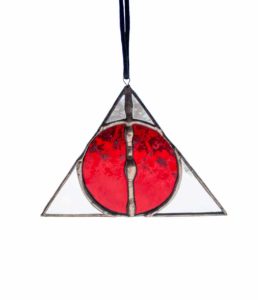 A magnificent round stained glass window based on the Harry Potter movie. Stained glass window hangings can be used right out of the box. Strong chain, bright glasses, unique design will not leave you indifferent. But, of course, you have to hang it on the window or in any other place at your discretion.

Deathly Hallows is the unifying name of three artifacts: the Elder Wand, the Resurrection Stone, and the Invisibility Cloak, which, according to legend, was given by the incarnation of Death to the Peverell brothers.
Many wizards sought these Gifts, believing that the owner of all three could become the lord of Death.
The master of Death can only be aware of its inevitability but is not afraid of Death and accepts Death as part of life.
A beautiful snow-white owl plays a very loyal post owl student wizard Harry Potter in the film.
Hedwig brings the letters to Hogwarts School of Magic and Witchcraft and returns them. After all, in the world of wizards, owls do the work of letter carriers. So the owl always knows where to find the addressee, even if his house is under the spell “Fidelius.” And only the recipient’s name is indicated on the envelope.
Millions of Harry Potter fans will be happy to hang such a stained glass window in their room, even as window decor, even as a wall.
Give the Suncatcher Owl to your children, nephews, and just owl lovers and Harry Potter fans. 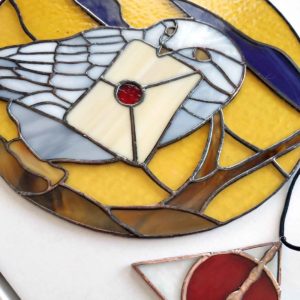