1 in stock (can be backordered)

The red cardinal is a bird with bright plumage and a symbol of the seven states of the United States.
The red or Virginia cardinal is a songbird that belongs to the family Cardinalidae. It has red-purple plumage.
The red cardinal is a favorite of many Americans. No wonder they chose it as their bird symbol in seven states at once! Virginia, West Virginia, Illinois, Indiana, Kentucky, Ohio, and North Carolina. But the cardinal is adored not only by Americans but also by Canadians.
The male is gorgeous – he is all crimson-red, very bright, with original black “glasses” around the eyes and near the strong beak. The main character Red from the cartoon and the same name, Angry Birds, is drawn from here.
The bird belongs to the order of passerines and therefore inherited from them many traits of character and behavior.
This name was given to the bird due to the bright red plumage of the males and a specific black mask along the beak and neck. The color of the females is dominated by calmer colors-gray, light brown.
Cardinals are brilliant, and they have an excellent memory. But most importantly, the beautiful cardinals are excellent family men. They are distinguished by their loyalty to the lady of the heart and take care of their offspring. Unlike many birds, cardinals form pairs for life, not just for the breeding season. 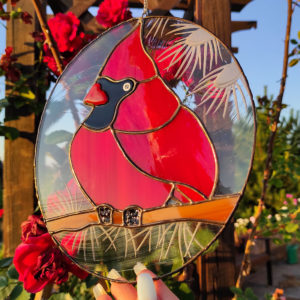 1 in stock (can be backordered)